Paradise indeed – The Gardens of the Real Alcazar, Seville, part 1

Posted on June 18, 2011 by yourgardenpartner 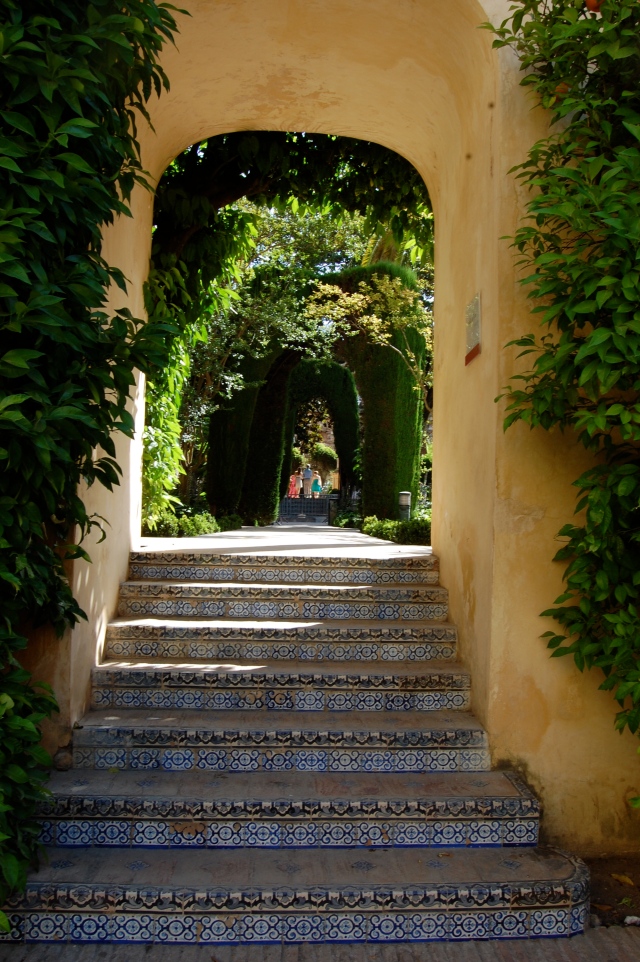 Tiled steps into the 'historic' gardens

If you want to understand the long-term influence of the Islamic garden on European garden styles, a visit to the Real Alcazar of Seville will give you both a master class in design history and a walk-through lesson that will stimulate all your senses.

The Real Alcazar  (‘Real’ meaning royal, as in Real Madrid, and pronounced ‘ray-al’) was built in the 14th century, on the site and remains of the 10th century Moorish palace, by King Peter 1, who had been raised in the original palace (Alcazar Bendito). Like much of historic Seville it was built in the Mujedar style (Mujedar meaning ‘allowed to remain’), fusing Spanish Christian gothic and Moorish Islamic styles.

In the tradition of Moorish architecture, internal courtyards and gardens are a fundemental element of the palace design. Tiled rooms and corridors offer glimpses, through archways, of cool greens and the sound and smell of water.  Inside the palace there is the Maidens’ Patio, a central, open, space of a still pool, arcaded walks, and reflective, shining leaves. 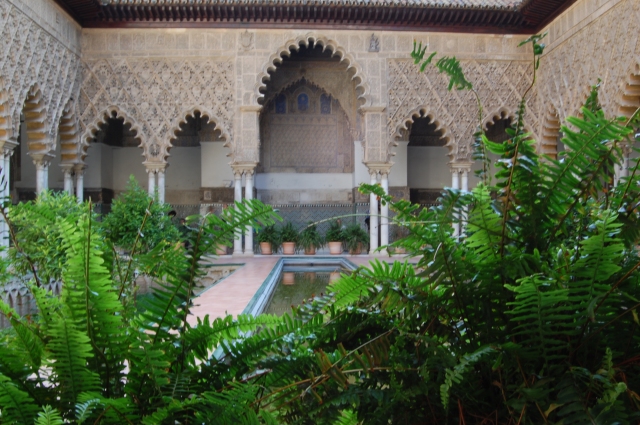 Patio of the Maidens

Each of these gardens has its own style, but they are unified by a common sense of purpose – enclosed by the high walls of the inner palace grounds they offer light and shade, delight of the five senses, and privacy; stairs, benches, pools, and fountains decorated with the elaborate patterns of Mujedar tiles; paving of patterned brickwork and tiles; predominantly evergreen planting with the occasional and seasonal burst of flowering colour or fallen fruit; the cooling sound, feel, and sight of running water and still pools; and everywhere, and even louder than the patter of the tour guides, the sound of birdsong. If for humans the Islamic garden was said to be a glimpse of Paradise, for the birds of the Real Alcazar these gardens must be Paradise indeed.

Paving from the Flower Garden

In the historic gardens the layout of paths and beds is strictly geometric – the archetypical divided quadrant of the Persian garden is the dominant motif, with rectangles of green planting intersected by water or paths. At the crossing centres there are sometimes fountains, sometimes patterned paving. In these gardens the views are not long, the eye is drawn along but also upwards and sideways. The one exception to this is the dramatic jet of water at the end of the series of historic gardens, where a huge waterspout erupts from some 20 m high to splash into the Pool of Mercury/Pond Garden. 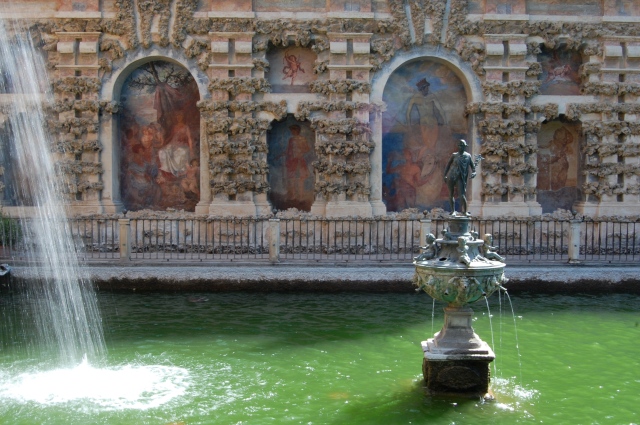 Water spout into the Pool of Mercury

The gardens are colourful without being gaudy. Everywhere there is the green of glossy leaves, set off against the orchres and dull red (oxblood) tints of the plaster and bricks. Amongst these steady colours there are the brighter and repeated patterns of the tiles, a predominance of blue, but also sage greens with dull golds and earth browns. From the plants there is the bright red stab of Hibuscus flower, the sky blue of Agapanthus, and pitted orange of fallen fruits, echoing the colours of tiles, brick, and sky. 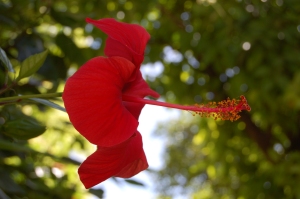 And not to be forgotten, climbing against the sky and pitted against the earth, are the slender patterned columns of the date-palms, rich earth-grey, and the huge,  carved trunks of the magnolias, almost slate in their solidity.

What strikes me about these gardens – those within the palace and in its immediate vicinity – is their essential modernity: everytime I design a small urban courtyard garden, or the slightly larger suburban ‘back garden’, this is what I am aiming for – a seamless integration from house to outdoors, so that the eye continues its journey:  an extension of textures and colour, gradually substituting the man-made for the natural; a geometry which is true to the angular geometry of buildings, but softened by the natural symmetry of plants: a view which is constrained by the surrounding buildings, to a certain extent sheltered from them, but occasionally exploded by a trompe  l’oeil ; and a sense of privacy, belonging, and enclosure that city-dwellers need as a retreat from the bustle around them.

In Seville gardens shelter the people, birds, and many small mammals and insects from the heat: in England we need to design gardens that will shelter us from occasional heat, and much more frequent rain, but still allow us to feel that we have a safe and enticing outdoor space to retreat to.

This entry was posted in Garden visits. Bookmark the permalink.